The celebration kicked off with an outdoor concert at the Riverbend Music Center with Rod Stewart, Arthur’s long-time admirer and fan. It’s dream come true to see the knight on stage. After overnight at Marriott, a lazy morning of too much breakfast, we picked up Cindy Red bikes to explore both sides of the Ohio River on two wheels.  It was a fun weekend! 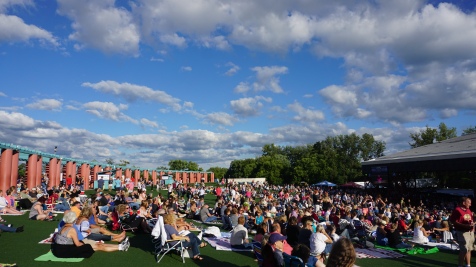 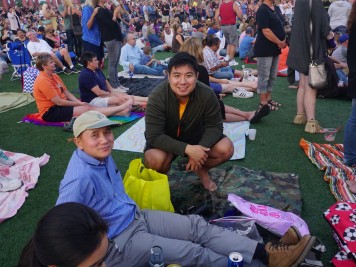 No surprise, we’ve been to many attractions in Cincinnati, but this was our first visit to Riverbend Music Center.  The Riverbend located adjacent to Coney Island Recreation Park, along the north side of Ohio River Front.  The concert tickets included parking, we were surprised by how organized and orderly this place was,  from parking to going through security, to find our spot on the lawn, the lawn was synthetic, nice and dry despite the heavy rain in the afternoon. 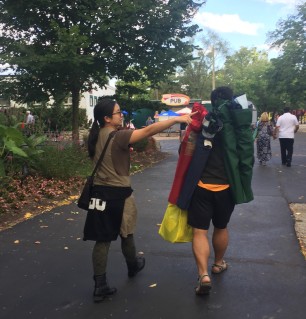 Cyndi Lauper opened for Rod Stewart.  She still wore her iconic pink hair, I couldn’t believe my eyes when I googled and found out her being 64 years old!  Her voice was still amazingly girly.  She rallied the crowd with songs, like Time After Time, Girls Just Want to Have Fun, and True Color, etc. 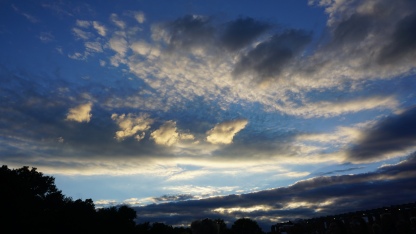 The weather was so nice, evening breeze, beautiful sunset, everyone was in high spirit when Rod Stewart got on the stage!  He promised an hour and half nonstop fun, boy! He knew how to deliver!  Definitively world class, totally different caliber than Cyndi Pauper.  The crowd wouldn’t sit down, singing and dancing along, you couldn’t help but get pulled and sucked into his vortex.  With his raspy voice, he captivated the audience with one song after another, Rhythm of My Heart, Have I Told You Lately, Forever Young, Tonight Is the Night, Maggie May, Reason to Believe, You Are In My Heart, Da Ya Think I Am Sexy, Young Turks, and many more!!!

Superstar he is!  The way he controlled the air flow, the charisma that flew through his songs, his body language were so electrifying!  He himself was the magic, the total package!  Seeing him on stage in person totally has converted me, now I join my husband, am a die-hard Rod Stewart fan!

With Sir Rod’s amazing voice hanging in our heads and ringing in our ears way past midnight, a lazy morning was expected; we did not leave the hotel until noon!  Thank the Lord for a beautiful sunny day with high of 77F, couldn’t beat that for a summer day.  We waited no more time to pick up our Cindy Red Bikes. 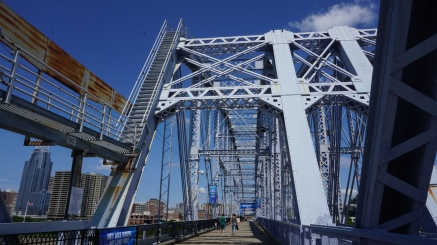 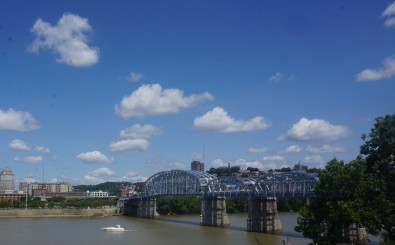 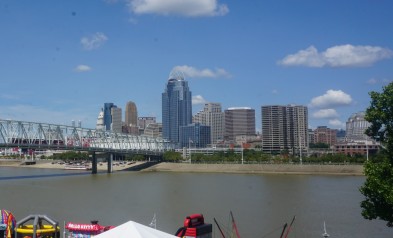 The Purple Bridge (shown above, in blue color actually) is a traffic-free pedestrian bridge, especially for walking and biking. I liked the convenience of its connecting Cincinnati, OH and Newport, KY. 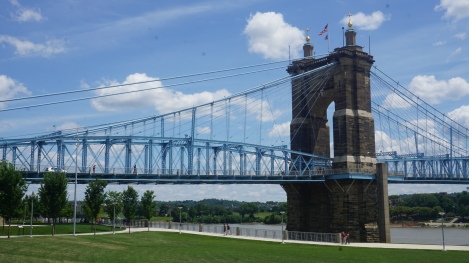 The city of Cincinnati has newly renovated the river-front bike trail.  However, we had to forfeit the plan to bike the whole length because we lost the whole morning. 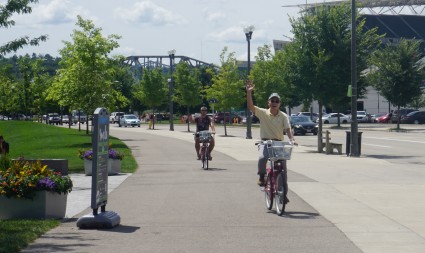 If you need a hotel in Cincinnati area, I strongly recommend SpringHill Marriott, newly opened in July.  The furniture and bedding, everything smelled fresh and new! The furnishing and decoration was very tasteful and modern.

If you haven’t tried Cincy Red Bike system, similar to the pay-and-go cycling system in many big cities, you should give it a try. We used similar system in Chicago, IL, and Montreal, Canada. For a fixed starting fee, you can get a bike, as long as you return the bike or exchange to a new one, at any station within 60 minutes, you will not be charged for more.  We love how the system works, because it usually takes less than an hour to bike from one destination to another, we never go over the time limit.  You drop your bike, visit the museum or park or whatever, when you are done, pick up another bike, keep going. A fun and economic way to tour a city!

If you ever go to an outdoor concert at Riverbend, one thing to remember that the lawn chair has to be lower than 9-in, which is much lower than your ordinary lawn chair. The soccer chairs we brought were too high, we had to drop them back to our car.

Since the traffic to the city was so congested because of the construction, we had to cancel our pre-concert dinner reservation, relied on concession food to hold off the hunger.   The concession food was typical: burger, hot dog and snacks like nacho and pretzel, pricey yet nothing special.  If not for the detours and stuck in the traffic for hours, we would not have eaten concession food for dinner.

Another way to save money at Riverbend is to buy lawn tickets.  For Rod Stewart concert, the lowest ticket price for a seat was $195, which located at the last roll with obstructive view; the front seat ticket was $388.  Since it was so expensive, we thought about purchasing two front seats for us and leaving the kids out in the back on the lawn for $40 each.  So glad that we eventually decided to stay together on the lawn. The lawn was clean and soft, dry despite the heavy rain in the afternoon.  With the lawn tickets, we not only saved money, we could walk around freely, singing and dancing with the crowd when ever we felt like.  It was really fun!

New York City is one of my favorite cities, I can’t get enough of her.  Last year alone we were there three times: college tour of NYU in the spring with our daughter, Broadway show in the summer with our son, and parent weekend in the fall. We also visited NYC in the winter months, one year we even attempted to wait for the Big Apple drop at Times Square on New Year’s Eve!  However, our children were not ready for eight-hour without bathroom break, around dinner time we declared defeat.

A friend of mine is planning to visit NYC this summer, I thought to share some tips for her.

First of all, don’t attempt to drive in Manhattan. When we were there last summer, we parked our car on the Jersey side of Hudson river (Weehawken, NJ), the parking was indoor, very clean, and conveniently located near the ferry dock (Port Imperial Terminal).  Because we purchased the Broadway tickets from the NY Waterway-Your Key to the City, we not only got free round-trip ferry tickets, the deal also included 40% off our Broadway tickets.  Way to go!

The ferry dropped us at the West 39th street of Midtown Manhattan.  There were public transportation nearby.  However we packed light since we planned to do a lot of walking in the city, it took us half an hour to walk to our hotel on 46th street.

Broadway at Times Square Hotel is only two blocks from Broadway and Times Square.  Great location with walking distance to all actions.  Staying in the center of attractions has always been our strategy when visiting big cities. It may cost a bit more for hotel stay, but the right location save us from the hustle of commute.  Why wastes time and energy on driving and fighting traffic?  After checked in and left our luggage, we were ready to explore the city.

Depending on the hours of the day and days of the week, such as crowded evening at the weekend or early morning rush hour of a weekday, Times Square has very different vibes. 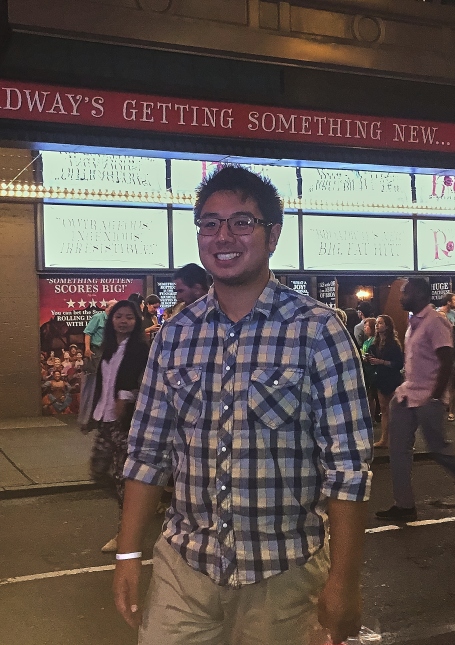 As always, there are lot of things to see in this magnificent city, too little time. Manhattan is very walkable, and metro was reliable most of the time.

We could easily spend a whole day at Central Park and the nearby Metropolitan Museum. 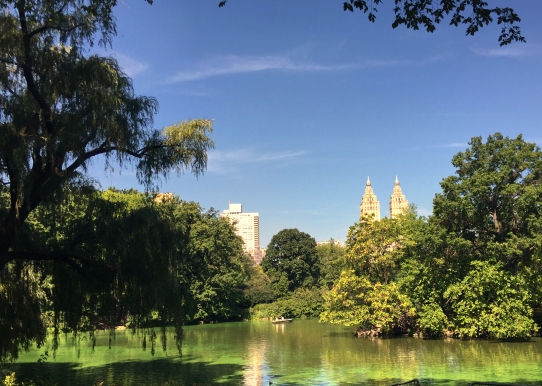 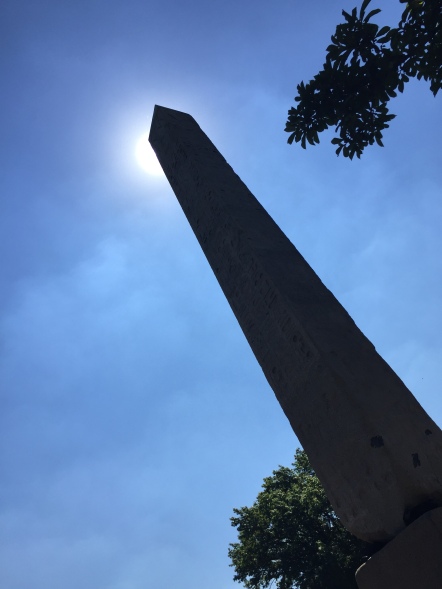 Know ahead that there is no way you can do it all.  Pace yourself, save something for the next time.

Brooklyn Bridge is a favorite for many.  If you pick one bridge to walk through, make it Brooklyn Bridge! The view is amazing in any time of the day no matter which season. But it is spectacular at sunset.  So linger a bit longer, you will see the brilliant light of Manhattan as the night falls.

One last tip to save money on Broadway tickets: if you don’t mind staying in lines to wait for the same day show, you may visit tkts Ticket Booth at Times Square (or other booths).  You may not have a huge selections, however the catch is you pay only half the regular price! 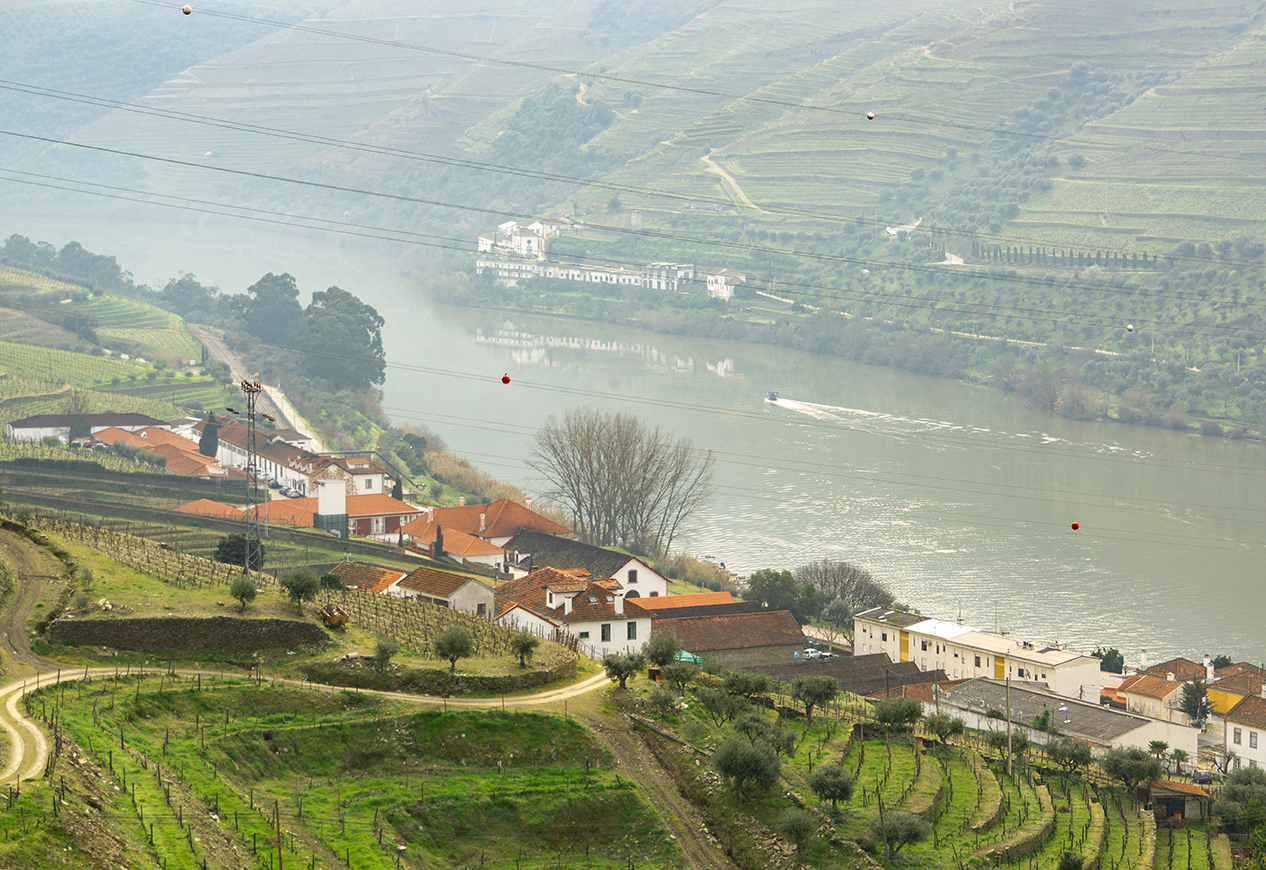 Be Positive During Quarantine 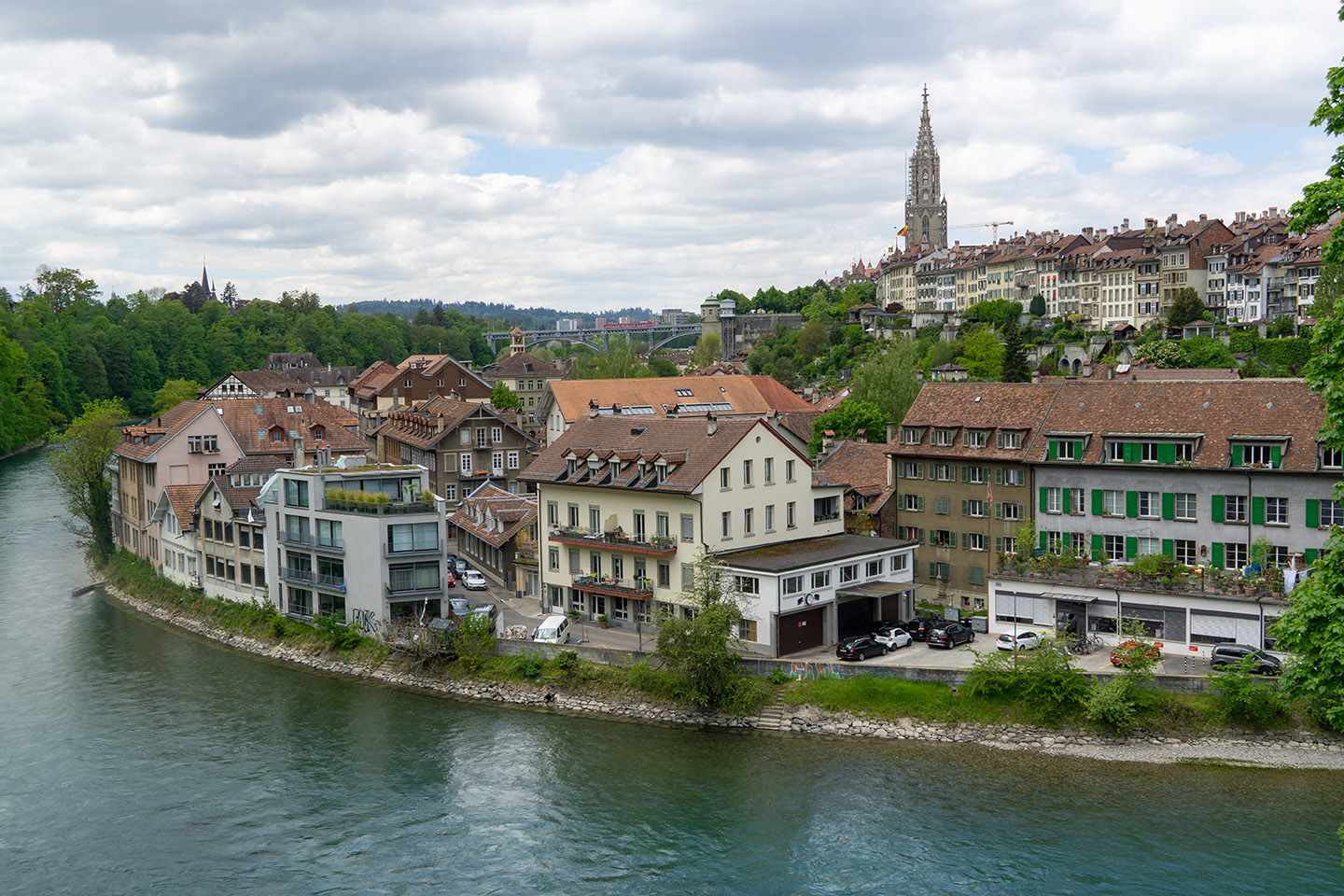